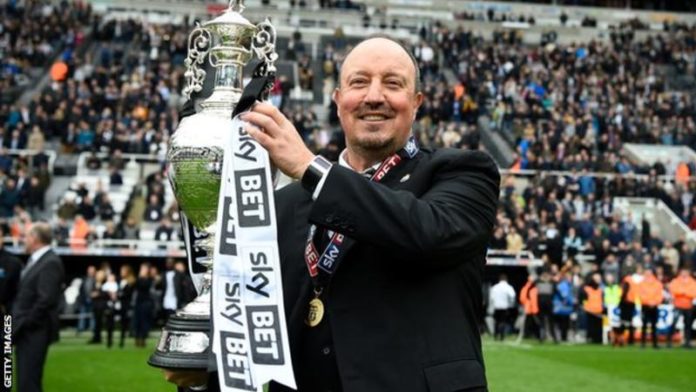 Newcastle manager Rafa Benitez says the “crazy” summer transfer market is to blame for the club’s struggle to recruit the new players he wants.

But 57-year-old Benitez had hoped to have much of his recruitment complete before the players returned for pre-season training last week.

“The top sides have a lot of money and the others are spending too,” he said.

“It’s not easy for a lot of teams because the market is a little bit crazy. We have to try to do our best.

“We know where we are – that is not ideal because everybody wants to see a lot of players signing already – but we have to keep working and see what we can do.”

In a club statement at the end of last season, Newcastle owner Mike Ashley said Benitez and managing director Lee Charnley could have “every last penny the club generates” to build for next term.

Benitez was told to expect up to £100m to spend on new players following “positive” discussions with the owner.

Speaking at the club’s 1892 Foundation Cup event, Benitez continued: “We can do nothing other than just keep working to find the players that we want, and hopefully we can do it.”

Newcastle assembled one of the most expensive squads in Championship history last summer, spending more than £50m on new players as the former Liverpool, Chelsea and Real Madrid manager led them to the Championship title and promotion back to the Premier League.