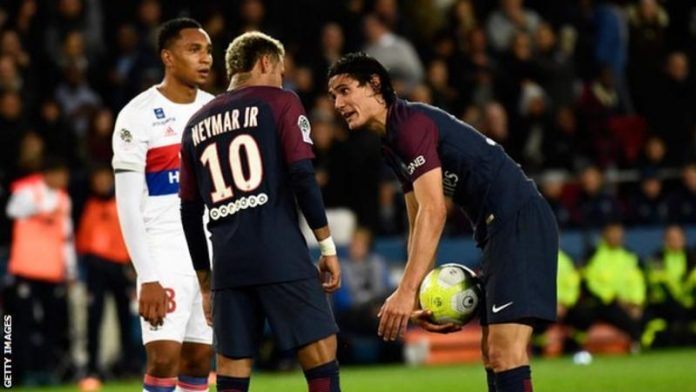 Paris St-Germain boss Unai Emery says he will step in if Neymar and Edinson Cavani cannot sort out their differences over taking set-pieces.

The forwards seemed to quarrel over a penalty in a 2-0 win over Lyon before Cavani took it and had it saved.

“I have told them to sort it out between themselves,” said Emery.

“I think that they are capable of doing that and that they will both be our kickers. If they cannot reach an agreement, I will decide for them.”

He added: “I do not want this to become a problem for us.”

PSG needed two Lyon own goals to secure victory and maintain their 100% record at the top of Ligue 1.

The home side struggled to make chances until Marcelo turned Cavani’s flick into his own net, with the second coming from a rebound off Jeremy Morel after Kylian Mbappe’s shot was pushed onto his knee by onrushing keeper Anthony Lopes.

In between the own goals, Cavani’s spot-kick, awarded when Ferland Mendy bundled Mbappe to the ground, had been well saved by Lopes.

Before going behind, Lyon had troubled the league leaders, with Tanguy Ndombele rattling the bar from long range.

PSG have won their opening six league matches and hold a three-point advantage over Monaco, the team that denied them a fifth successive title last season.