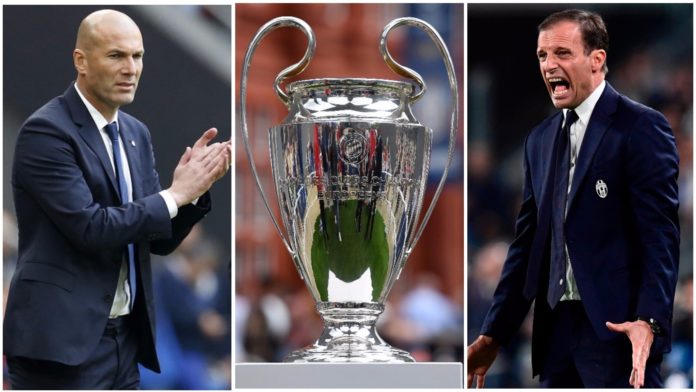 Real Madrid have an “appointment with history” when they face Juventus in the Champions League final in Cardiff on Saturday, says captain Sergio Ramos.

Eleven-time champions Real are aiming to become the first team since AC Milan in 1989 and 1990 to retain the trophy.

Italian side Juventus are looking to win the crown for the third time, while Real can extend their own record.

“We never dreamed of this opportunity but the stats are there,” said Spain international defender Ramos.

“It is a wonderful chance to take the cup home, then history speaks for itself. We are extremely excited about the chance to have two successive Champions League trophies.

“We have been very solid. Every time we have had the chance to fight for a trophy, we have done that. We are going to be extremely focused, very concentrated so we make as few mistakes as possible.”

‘We will see a great final’

Real Madrid won La Liga ahead of Barcelona this season and have scored 169 goals in all competitions this season.

In a repeat of the 1998 final, which the Spaniards won 1-0 in Amsterdam, Real come up against a side who are unbeaten in this season’s competition

Boss Zinedine Zidane, who played for opponents Juventus between 1996 and 2001, said: “We know all about pressure at Real Madrid.

“We are not favourites, nor are Juventus. It is 50-50. But we are in the final again, and everything is possible. I expect an open game on both sides.

“I have lived and been at Juventus, in Italy there is the famous Catenaccio, but Juve do not just have that.

“We are going to try to play our game, we know we are going to play against a great team. What everyone who likes football wants to see is to see a great final – and I think we will see that.”

Zidane must decide whether to choose between Gareth Bale and Isco in what seems like his only selection issue before Saturday’s Champions League final.

Bale has not played since 23 April but is fit, while in-form Isco has scored five goals in his last eight games.

“I am not going to tell you who is going to play on Saturday,” said Zidane.

Juventus boss Massimiliano Allegri also has a fully-fit squad to choose from. His side defeated Monaco 4-1 on aggregate to reach their second final in three seasons.

Real knocked out city rivals Atletico with a 4-2 aggregate win and are looking to defend the title they won last year.

Treble-chasing Juventus clinched a record sixth consecutive Serie A title this season and beat Lazio in the Italian Cup.

Juve have been European Cup winners twice, in 1985 and the last in 1996, but have been defeated finalists on six occasions, most recently against Barcelona two years ago.

They have conceded just three goals in 12 games so far, while Real have scored in every single one of their 12 games – a total of 32 goals.

Manager Allegri said: “We have worked hard all year and the wins this season have been all about reaching this game. But on Saturday we need to win and we need to understand when will be the moments to attack and when to defend.

“We have to have the belief that we can bring the cup home and we have to be fiendish to strike when Real offer us an opening.”

Massimiliano Allegri has done a great job at Juventus and has continued the work of Antonio Conte since arriving in Turin in 2014. He has been able to create a strong team spirit and is currently one of the best managers in Europe.

I had the privilege of playing alongside Zinedine Zidane in Italy for two years. He was a fantastic player with amazing technical skills and a strong personality. I was his room mate in hotels before games so I had an opportunity to know him very well.

I expected him to be a great manager because he has all the skills to do the job. I did not expect him to achieve great results so soon though. He has been doing an excellent job for Real Madrid.

Juventus full-back Dani Alves, 34, could win the competition for the fourth time, while 39-year-old goalkeeper Gianluigi Buffon is looking to triumph for the first time and in turn become the oldest winner of the tournament.

Alves, who played in that match for the La Liga side, said: “A player as important and big as Gigi, to not have this trophy, it would not really change much in his career but it would add one more page to his wonderful football history if he won. To win the title with him would be quite something for me before he retires.

“I am not a person who thinks about himself. If everything around me is fine, then I am fine too. The objective is for the whole team to win and for me to be up to the level of my colleagues.”

World Cup winner Buffon announced in January 2016 that he will retire from football after the 2018 World Cup and this may be his last shot at winning Europe’s elite club competition.

He said: “Dani is a bit like me, he is an optimist. He told me ‘I will make you win the Champions League’ and he has been a revelation for me. Real Madrid are used to winning finals, we have lost quite a number of them. It is a good match and we will try to overturn our record.

“The emotions I might feel may be different to a younger player. Dani has won this competition and has four or five years left in his career but I have to exclude this possibility. Yes, it will be much more special for me, but I want to play without regrets and without thinking of these issues.”

Italian football might have looked very different over the last two decades if an impressionable 12-year-old had not been captivated by the Cameroon goalkeeper at the 1990 World Cup.

Buffon played as an attacker back then but the performances of Thomas N’Kono – playing in his third World Cup – inspired him to try life as a goalkeeper.

A long and competitive history